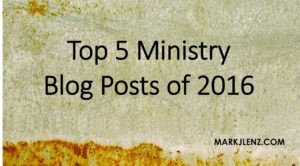 My passion is to bring clarity and focus to ministry and mission. I accomplish this by doing church consulting at Interactive Church Consulting, and by blogging. Here are my top 5 blog posts of 2016 that help churches and ministries both honor God and inspire people.

3 Layers of Ministry
Contemplating the importance of three critical aspects of ministry.

Clarifying Church Growth Terminology
What exactly are we talking about when we talk about church growth?

Categories of Beliefs, and Why Separating Them is Important
Which beliefs will you discuss, defend, and die for?

3 Kinds of Church Staff Members
Maximizing the effectiveness of the experts, managers, and leaders on your ministry staff.

Beliefs. We all have them. They came from somewhere. They probably started forming in us as young children and have been strengthened through time. Or maybe they’ve changed over the years. Changing a belief or a belief system is a big deal because our minds are wired to think that our beliefs are the correct ones. It’s been said we are creatures of habit. That’s because we believe the way we do things, the way we think, is right. 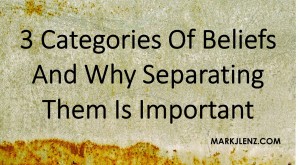 Obviously, beliefs are very significant in the church. Beliefs are the foundation of our faith. What we believe about God, Jesus, people, the Bible and the Church are of utmost importance. And, as noted, beliefs rarely change. As in the political world, our Christian beliefs, or differences in our beliefs, can be the topic of many disagreements, arguments, and even church splits. That’s why it’s wise to separate our beliefs into three different groups based on their importance. Here are three different categories of beliefs.

Die For
There are several beliefs we should be willing to die for. These are the things that are crystal clear in scripture that are of greatest significance. The nature of God. The work of Christ. The significance of the cross. Beliefs about people, sin and repentance. Beliefs about the Church and the Bible. These are the “die for” beliefs that make us Christians. END_OF_DOCUMENT_TOKEN_TO_BE_REPLACED