Several years ago, I learned an important lesson about the difference between delegating tasks and releasing authority. I was in a ministry situation where I was selected to be on a small team to plan a special training event for our staff. We were each given different aspects of this task and each of us worked very hard to deliver great results. But as we progressed, it became evident that the leader of our team was running just about every detail past our senior leadership team for approval.

The event came and went, and by all accounts, it was fairly successful. But I learned an unexpected, valuable lesson from the experience. I thought our team had been given authority for the event. But in reality, we had been merely delegated tasks.

After reflecting upon that experience, I came to a greater awareness of the difference between the two. Here are four insights on why releasing authority is better than delegating tasks.

Multiplies effectiveness
When a church begins to grow, the senior leader must begin to delegate tasks. The sheer number of duties in a growing church quickly outnumber the leader’s capacity to perform them all. 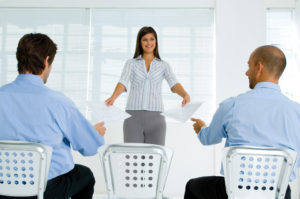 But as a church continues to grow, senior leadership needs to do more than assign duties. They need to begin to release authority.

Dale Peterson, the Executive Director of Ministry Multiplication at Eagle Brook Church in the Twin Cities, said that their senior leadership team came to a watershed moment when they learned to release responsibility, not just delegate tasks. It’s when their church went from being a growing church to a multiplying church.

Broadens responsibility
When leadership is shared, it divides the load and multiplies the effect. But if all authority lies with one person or committee, it can slow the decision making progress to a crawl. Bottlenecks begin to emerge. Progress is hindered. And tensions rise.

See Acts 6 and the widow crisis in the Early Church as an example. Their solution? Spread out the responsibilities! The leaders appointed deacons and said, “We will turn this responsibility over to them.” People got fed, widows were cared for and the Church took off.

Today, if a variety of people are actually responsible for different areas of ministry, growth is developed, needs are met, and frustration is minimized.

Creates ownership
There’s a significant and qualitative difference between taking on a task and taking on a responsibility. Completing a task is doing what’s asked with a great attitude. But taking responsibility is doing everything that’s needed.

The key difference is ownership. This is why renters sometimes trash apartments. Because they don’t own them. Homeowners, on the other hand, tend to care more because they are financially invested.

If you are delegated to complete a ministry task, you don’t own that task. The one who delegated it does. But if you are given authority, you own the responsibility. If it succeeds, it’s because of you. If it fails, that’s on you too.

Invests in mid-level leaders
Author and management guru, Patrick Lencioni, says one sign of a miserable job is anonymity. People won’t be fulfilled if no one recognizes them or knows what they contribute to the team.

By releasing authority, mid-level leaders will feel valued, trusted and appreciated. They will be given an opportunity to shine and show senior leadership what they’re made of.

Will this always work out well? Of course not. It requires patience, and a willingness to embrace the messiness that is leadership development. But by taking a few, well-calculated risks, and releasing authority, you will see your church begin to move farther, faster, and with greater kingdom effectiveness.